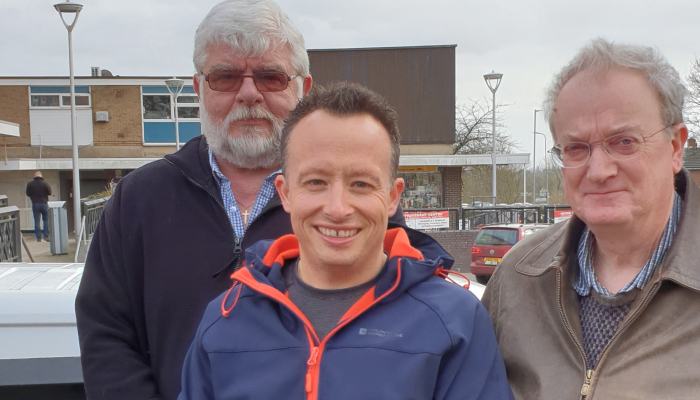 Andy McGuinness (centre in the photo) was first elected for Manor Ward on Stevenage Borough Council in 2014 and then re-elected in 2018 with a huge 61% of the vote. Andy believes in vocal local activism and the positive role that Councillors play in representing and advocating for the needs of local people.

On the Borough Council, he serves on the Overview and Scrutiny Select Committee as well as the Licensing and General Purposes committees.

Andy sits on the board of Chells Manor Community Centre and is a former governor of Lodge Farm Primary School in Manor Ward. Andy has a long professional history of working in politics, advocacy and campaigning. He worked for 6 years in local Government supporting Executive Members, for three years he ran the Westminster office of a Lib Dem MP and is a former Campaigns Manager at Crohn’s & Colitis UK. Andy currently works in Public Affairs for Macmillan Cancer Support.

He passionately believes in strong local representation and the need to be active on the doorstep, holding local community meetings, communicating with local people, and listening to their concerns. So, if you’re a local resident in Manor Ward and have any problems then please don’t hesitate to contact him.