Neil Brinkworth, Chair of the local branch, said “We were visited by a broad cross-section of people from all over Stevenage and reflecting all opinions expressed in the referendum 3 years ago. We invited them to give their views on some direct questions by putting stickers on a board, but we were careful not to influence them in any way.” 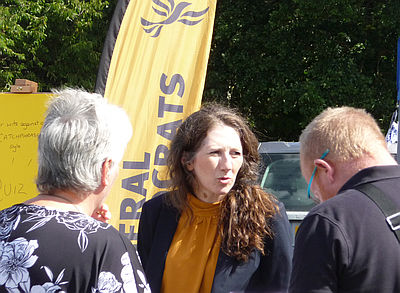 Lisa Nash, who was the Liberal Democrat Parliamentary Candidate for Stevenage at the 2019 general election, was at the event. She said “It really seems that people are realising what the implications of Brexit – and particularly a “no deal” Brexit – would be. Because of this, they are changing their minds about the wisdom of leaving. We asked people about their support for suspending Parliament and over 71% said this was wrong. I think the message to Boris Johnson and his Conservative government is clear. Rather than prorogue Parliament to force through a no-deal Brexit he needs to ask for a further extension in order to hold a People’s Vote. We could then see if the country still supports leaving and, if so, with or without a deal.”

Neil added “The Liberal Democrats firmly believe that, as long as we remain part of the EU – the second largest trading bloc in the world, the UK will be better off for jobs, funding of public services and the rights of our people. It is just a shame that our Government is not being truthful with voters about what Leave really means for ordinary people.”