“This is heartbreaking for me and for our whole Liberal Democrat family.

"Shirley has been an inspiration to millions, a Liberal lion and a true trailblazer. I feel privileged to have known her, listened to her and worked with her. Like so many others, I will miss her terribly.

"Political life will be poorer without her intellect, her wisdom and her generosity.  Shirley had a limitless empathy only too rare in politics today; she connected with people, cared about their lives and saw politics as a crucial tool to change lives for the better.

"Shirley Williams had a profound impact on me as a young Liberal, as she did on countless others across the political spectrum. Her vision and bravery, not least in founding the SDP, continues to inspire Liberal Democrats today.

"Rest in peace, Shirley. My thoughts and prayers are with your family and your friends."

Leader of the Liberal Democrat party in the House of Lords Dick Newby said:

“Shirley Williams was a charismatic, committed and fearless politician who believed passionately in a fairer society and in Britain’s European destiny. She was an inspiration and mentor to many younger politicians and maintained her campaigning zeal to the end. She was central to the formation of the SDP and the Liberal Democrats, and will be greatly missed by many in her extended political family.”

“Shirley was a towering figure in UK politics for many years. I first got to know her in 1966 when I was (briefly) a member of the Labour Party. My abiding memory of her from that time is one Friday night in 1967 when, following a meeting about the Common Market at a hall in Letchworth, I tackled her about nuclear weapons, even though that was not relevant to the subject of the meeting. She had endured a long week in the House of Commons as a MP and government minister. The caretaker had locked the hall and gone and her taxi was waiting for her with the door open and the driver was calling out for her to get in - and there we were, standing in the pouring rain. Yet she was prepared to spend several minutes with me – a mere 15 year old – arguing forcibly her case for multi-national, rather than unilateral, disarmament.

“This illustrates perfectly Shirley’s passion for people and making sure that everyone, non-voting teenagers included, got every chance to express their views.

“In later life, I canvassed locally with her several times and I was impressed at how good her memory was, in knowing people for whom she had done casework, and canvassed, decades earlier when she was MP – and impressed also by how many people immediately recognised and remembered her.

“Shirley always kept up her links with Stevenage and always was willing to attend local events for the town, council or party. She was also President of Stevenage Liberal Democrats.

“She was at least partly responsible for getting me into politics nearly 60 years ago and I valued her advice and experience.

“Shirley Williams will be sadly missed by all of us - but her work and enthusiasm for Stevenage and the wider community will live on.

“Our deepest condolences go out to Shirley’s family and friends at this very sad time.” 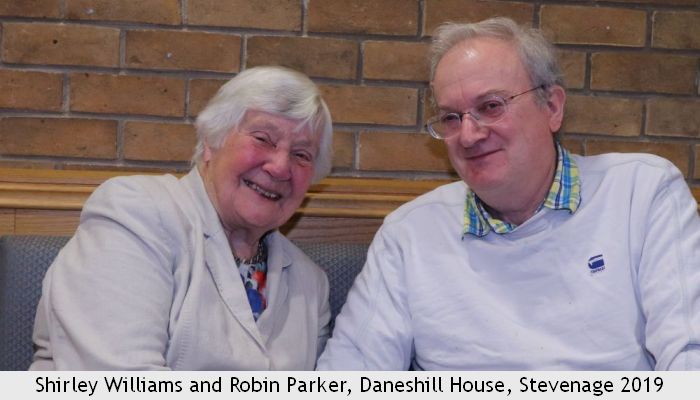